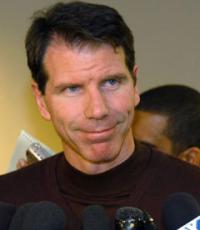 As a collegiate star at UCLA, Vandeweghe, along with head coach Larry Brown, led the Bruins to the 1980 NCAA championship game.

As a player, Vandeweghe was regarded as an excellent scorer and outside shooter. His offensive repertoire was powered by a single move, the jab step. He was so proficient at this lone move that it was often referred to as the "Kiki Move" toward the end of his career.

As a member of the Nuggets, Vandeweghe was twice selected to the NBA Western Conference All-Star team, in 1983 and 1984. In the summer of 1984, Vandeweghe was traded to the Portland Trail Blazers. Vandeweghe had several productive seasons in Portland, where he averaged nearly 25 points a game. He paired with Clyde Drexler to form a dynamic scoring duo.

On August 9, 2001, Vandeweghe was named to the Nuggets' general manager position and oversaw a return by the Nuggets to the NBA playoffs. Major moves by Vandeweghe have included the drafting of Carmelo Anthony in 2003, the trade for Marcus Camby in 2002 and the hiring of George Karl as head coach in 2005.

Vandeweghe spent the 2006-07 season as an NBA analyst for ESPN, appearing on the channel's SportsCenter and KIA NBA Shootaround programs among others. In 2007, the Nets announced that Vandeweghe would join the team as a special assistant to team president and general manager Rod Thorn. In 2009, he became interm head coach of the Nets, where he spent the rest of the 2009-2010 season.

Secure Kiki Vandeweghe for Your Event

Based on your interest in Kiki Vandeweghe as a speaker or for a personal appearance, Direct Sportslink has provided you additional links below for other sports talent with similar appearance fees, speaker topics, and categories that match Kiki Vandeweghe.