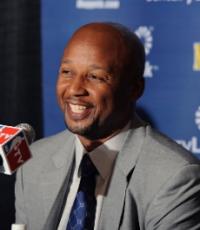 Shaw attended St. Mary's College of California for his freshman and sophomore years of college, then transferred to UC Santa Barbara for his junior and senior seasons. He was selected with the 24th overall pick by the Boston Celtics in the 1988 NBA Draft.

During his NBA career, he played for the Celtics, Miami Heat, Orlando Magic, Golden State Warriors, Philadelphia 76ers, Portland Trail Blazers, and Los Angeles Lakers. He was a member of four squads that made NBA Finals appearances: the 1995 Magic and the 2000, 2001, and 2002 Lakers (with the Laker teams all winning championships). He also played for the US national team in the 1986 FIBA World Championship, winning the gold medal.

Following the 2002-2003 season, Shaw retired. He worked for the Lakers as a scout and then assistant coach the following years. In 2011, Shaw joined the Pacers as an assistant coach, and later promoted to associate head coach. In June of 2013, Shaw was announce as the new head coach of the Denver Nuggets.

Secure Brian Shaw for Your Event

Based on your interest in Brian Shaw as a speaker or for a personal appearance, Direct Sportslink has provided you additional links below for other sports talent with similar appearance fees, speaker topics, and categories that match Brian Shaw.