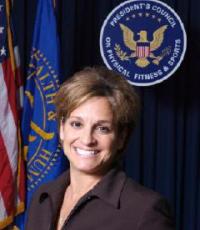 She won the Women's Gymnastics All Around Gold Medal in the 1984 Olympic Games; She is a member of the International Gymnastics Hall of Fame
Fee Range: $10,000 - $20,000
Secure Mary Lou Retton
for Your Event

Mary Lou Retton catapulted to international fame by winning the All Around Gold Medal in women's gymnastics at the 1984 Olympic Games in Los Angeles, becoming the first American woman ever to win a gold medal in gymnastics. She also won silver medals for Team and Vault, and bronze medals for Uneven Bars and Floor Exercise. Her five medals were the most won by any athlete at the '84 Olympics.

For her performance, she was named Sports Illustrated magazine's "Sportswoman of the Year" (shared with fellow American Edwin Moses). She appeared on a Wheaties box, and became the cereal's first official spokeswoman.

Retton retired from gymnastics after winning an unprecedented third American Cup title in 1985.

She continues to touch the lives of millions. A national sports survey found Mary Lou to be one of the most popular sports celebrities in America. She is in great demand as a motivational speaker and corporate spokesperson. She has traveled the world as a “Fitness Ambassador” promoting the benefits of proper nutrition and regular exercise.
Mary Lou has appeared in the motion pictures Scrooged and Naked Gun 33 1/3. She has made appearances on numerous television shows including Guiding Light, Knots Landing and Dream On, and guest starred in one of the highest rated episodes of the series Baywatch.
Secure Mary Lou Retton for Your Event

Based on your interest in Mary Lou Retton as a speaker or for a personal appearance, Direct Sportslink has provided you additional links below for other sports talent with similar appearance fees, speaker topics, and categories that match Mary Lou Retton.