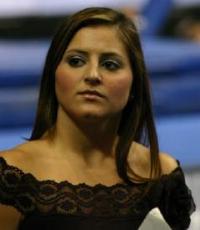 Dominique Moceanu was the U.S. Junior National Champion in 1994. In 1995 she repeated her success as a senior, becoming the youngest gymnast ever to win the U.S. Championships. She was the youngest member of the American team at the 1995 World Championships in Sabae, Japan. Dominque did not disappoint, earning the highest American placement in the all-around competition and becoming the only American gymnast to win an individual medal, a silver on the balance beam.

In the months leading up to the Atlanta Olympics, Dominique was one of the most recognizable faces of USA Gymnastics, eclipsing more decorated teammates such as Shannon Miller and Dominique Dawes. Her plucky attitude, showmanship and bubbly interviews gave her a wide fan base both in and out of the gymnastics community. In 1995 alone, Moceanu was featured in Vanity Fair and wrote an autobiography, Dominique Moceanu: An American Champion. The book was a best-seller.

At the 1996 Olympics, Dominique contributed heavily to the team gold medal, turning in such strong performances that she qualified for the event finals on balance beam and floor exercise.

Secure Dominque Moceanu for Your Event

Based on your interest in Dominque Moceanu as a speaker or for a personal appearance, Direct Sportslink has provided you additional links below for other sports talent with similar appearance fees, speaker topics, and categories that match Dominque Moceanu.