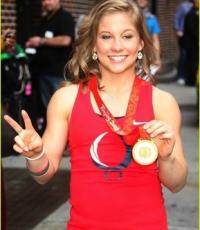 She was a 2008 Olympic Women's Gymnastics Gold Medalist
Fee Range: Contact Us
Secure Shawn Johnson
for Your Event

In 2004, Johnson competed in the Junior Olympics National Championships, finishing fourth in the all-around, first on beam, and second on floor. Johnson soon after qualified Junior International Elite on her first attempt. She won the 2006 U.S. Junior National All-Around Championship with a score higher than any of her senior elite competitors.

Shawn competed in the 2007 Pan American Games, winning four gold medals and one silver.  During the 2007 World Championships, she became the fourth American woman to win the all-around gold medal. In 2007 and 2008, Johnson was the U.S. all-around champion, which then led her to win a gold medal and two silver medals at the 2008 Olympics.

ESPN announced Johnson's 2009 nominations won an ESPY for "Best Female U.S. Olympian" and "Athlete - Female" Teen Choice Award, the latter for the second consecutive year.  She also became the winner of the season eight edition of Dancing with the Stars.  A scientific poll commissioned by Forbes magazine concluded Johnson was "America's Most-Liked Sports Figure" in 2009.

On June 3, 2012, Johnson ended her comeback for the 2012 Olympic team and retired because of her constant problems regarding her left knee.

Secure Shawn Johnson for Your Event

Based on your interest in Shawn Johnson as a speaker or for a personal appearance, Direct Sportslink has provided you additional links below for other sports talent with similar appearance fees, speaker topics, and categories that match Shawn Johnson.