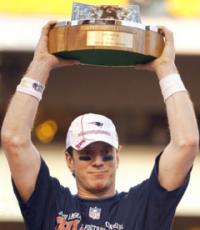 He was the #1 overall pick in the 1993 NFL Draft; He was the face of the New England Patriots franchise in the 1990's and led them to the XXXI Super Bowl victory
Fee Range: Contact Us
Secure Drew Bledsoe
for Your Event

An All-American for the Washington State Cougars and former #1 overall draft pick in the 1993 NFL Draft, Bledsoe was perceived to be the face of the New England Patriots franchise during the 1990s and early 2000s.

In his second season with the Patriots, Bledsoe set an NFL record pass attempts (691), became the second NFL quarterback to complete 400 or more passes in a season (400), and led the NFL in passing yards (4555). Bledsoe guided the Patriots to Super Bowl XXXI during the 1996 season.

Later in his career, Bledsoe proved  to be an integral member to his team's playoff run when he replaced a hobbled Brady in the AFC Championship Game against Pittsburgh. The victory over Pittsburgh allowed New England to reach Super Bowl XXXVI and defeat the St. Louis Rams.

Since his retirement in 2007, Bledsoe has opened a vineyard, the Flying B Vineyard outside Walla Walla, Washington and owns a coffee roasting company as well. He also works with many philanthropic organizations.

Secure Drew Bledsoe for Your Event

Based on your interest in Drew Bledsoe as a speaker or for a personal appearance, Direct Sportslink has provided you additional links below for other sports talent with similar appearance fees, speaker topics, and categories that match Drew Bledsoe.