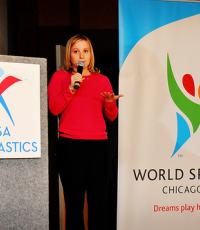 She was trained by legendary coach Bela Karolyi; She was a member of the 1996 women's Olympic gymnastics team - the Magnificent Seven
Fee Range: Contact Us
Secure Kerri Strug
for Your Event

Kerri Strug's shining moment came during the 1996 Centennial Olympic Games in Atlanta as a member of the "Magnificent Seven," the U.S. women's team.

Before 40,000 spectators, the United States had turned in a nearly flawless performance that had the seemingly invincible Russians on the brink of defeat. In the final rotation, the U.S. women had already achieved a convincing victory due to their wide margin of the Russian team, but those on the floor believed that the U.S. team still needed a single good score in the vault to win gold. Strug was the last to vault for the United States.

Strug landed the vault on her second attempt, sealing the women's team gold with a lofty score of 9.712. Strug raised her arms after her vault, turned and raised them again for the judges, then collapsed in agony to the mat, grasping her badly sprained ankle.

Strug became a national sports hero, visiting President Bill Clinton, appearing at various television talk shows, making the cover of Sports Illustrated and appearing on a Wheaties cereal box with other team members. Shortly after her feat, Strug participated in the Ice Capades and Disney's World On Ice, then announced her retirement and enrolled in UCLA. She later transferred to Stanford. After graduation, Strug worked as an elementary school teacher in the San Francisco area before moving to Washington, DC, in 2003.

She worked as a staff assistant with the U.S. Office of Presidential Student Correspondence, moved to a job at the Office of the General Counsel in the Treasury Department, and in March 2005, joined the Justice department's Office of Juvenile Justice and Delinquency Prevention staff as a presidential appointee.

Secure Kerri Strug for Your Event

Based on your interest in Kerri Strug as a speaker or for a personal appearance, Direct Sportslink has provided you additional links below for other sports talent with similar appearance fees, speaker topics, and categories that match Kerri Strug.