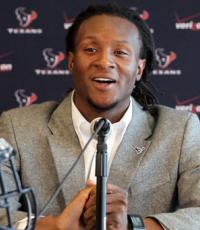 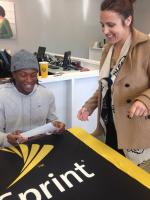 DeAndre Hopkins attended D. W. Daniel High School in Central, South Carolina. During his career he had 57 receptions for 1,266 yards and 18 touchdowns on offense and 28 interceptions and five touchdowns on defense.

Hopkins enrolled in Clemson University, where he played for the Clemson Tigers football team from 2010 to 2012.  As a true freshman in 2010, Hopkins was Clemson's leading receiver with 52 receptions for 637 yards and four touchdowns. Hopkins also played basketball after his freshman season. As a sophomore in 2011, he had 72 receptions for 978 yards and five touchdowns. In his junior season in 2012, Hopkins had one of the best receiving seasons in ACC history. Because of the two game suspension to Sammy Watkins and battling injuries Hopkins had to step up and so he did. With an ACC-best 1,405 yards on 82 catches and a school-record 18 touchdowns (second in the nation) earning First Team All-Conference honors. Hopkins, along with junior quarterback Tajh Boyd and wide receiver Sammy Watkins, combined to make one of the most prolific passing offenses in college football and broke many individual and career school records. Hopkins left Clemson with career record for receiving yards (3,020) and career touchdown grabs (27) with at least one score in each of the last 12 games. On January 10, 2013 Hopkins decided to forgo his senior season at Clemson and enter the NFL draft.

He was drafted 27th overall in the 2013 NFL Draft by the Houston Texans. This was just the second time in franchise history that the Texans drafted a wide receiver in the first round. On September 15, 2013, Hopkins had his first 100-yard receiving game against the Tennessee Titans. He also had his first career touchdown, a 3-yard pass from Matt Schaub, which was the game-winner in the Texans' 30-24 overtime victory.

Secure DeAndre Hopkins for Your Event

Based on your interest in DeAndre Hopkins as a speaker or for a personal appearance, Direct Sportslink has provided you additional links below for other sports talent with similar appearance fees, speaker topics, and categories that match DeAndre Hopkins.