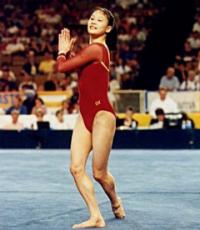 She won an individual Silver Medal on the uneven bars and a team Gold Medal at the 1996 Olympics; She holds a Stanford University undergraduate and graduate degree
Fee Range: $5,000 - $10,000
Secure Amy Chow
for Your Event

An Amy Chow personal appearance, Amy Chow speaking engagement, or Amy Chow endorsement will reflect well on your company. To hire Amy Chow now for any corporate appearance, fundraiser, motivational speaker event, personal appearance, autograph signing, or website endorsement please contact our celebrity agents at 1-877-6-SPORTS. We will contact Amy Chow or contact Amy Chow's agent and provide you with the booking fees and availability immediately upon your request. Direct Sportslink is the only sports speakers bureau and talent booking agency based in the United States securing only sports talent for corporations, associations, and organizations for motivational speaking engagements, personal appearances, and endorsements. We are the premier sports celebrity booking agency and a sports celebrity procurement expert. Accordingly, we will provide you with any relevant Amy Chow website information and booking agent details so that you can hire Amy Chow for your next event.

In 1981, Chow began gymnastics training and began competing in national and international competitions in 1990. She is primarily known for her performance at the 1996 Olympics where she won a silver medal on the uneven bars and a team gold.

Chow also competed in the 2000 Summer Olympics. She qualified to the all-around finals where she was the second-ranked American woman, finishing in fourteenth place.

Chow has two gymnastic moves named after her, the "Chow/Khorkina" and the "Chow II." She was nicknamed "the Trickster" for her extreme difficulty on each apparatus and her ability to perform complicated skills with apparent ease. She was the first American woman to perform both the double-twisting Yurchenko and the tucked double-double dismount on bars in international competition. Chow also competed one of the most difficult balance beam routines ever performed. She is a member of the famous Magnificent 7 who were the first American team to win Olympic gymnastics gold.

In addition to her gymnastic career, Chow is also a pianist. In 1994, she received an advanced level certificate of merit for piano. In 2006 she graduated medical school at Stanford University, having earned an undergraduate degree in biology from Stanford in 2002.

In 2008, Chow was inducted into the Olympic Hall of Fame in the team category, alongside the rest of the Magnificent Seven. The team received their award in Chicago with other Olympic greats.

Secure Amy Chow for Your Event

Based on your interest in Amy Chow as a speaker or for a personal appearance, Direct Sportslink has provided you additional links below for other sports talent with similar appearance fees, speaker topics, and categories that match Amy Chow.