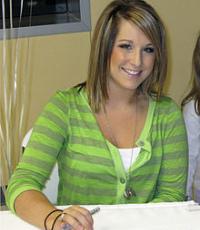 Carly was selected as the motivational speaker for a university looking to promote their Women's Walk with topics such as Diabetes and Nutrition followed by a meet and greet. Carly and other Olympic stars provide inspiration to many young women.

On August 19th that all of Carly's hard work, dedication, and love for gymnastics paid off. She won the most prestigious title in gymnastics, the title of 2004 Olympic All-Around Champion. Carly was the USA's first Olympic all-around champion in twenty years, as well as the first American woman to win an Olympic all-around title in a fully attended Olympic Games! She was elected to the USA Gymnastics Hall of Fame in 2009.

Since competition, Carly has devoted much of her time outside appearances and speaking engagements to her music career.

On February 4, 2008, Patterson signed a recording contract with MusicMind Records, a Chicago based Indie label. Patterson's song "Here I Am" was featured on the second season of the ABC Family series Make It or Break It, which is a television drama series that focuses on the lives of teen gymnasts who strive to make it to the Olympic Games.

Secure Carly Patterson for Your Event

Based on your interest in Carly Patterson as a speaker or for a personal appearance, Direct Sportslink has provided you additional links below for other sports talent with similar appearance fees, speaker topics, and categories that match Carly Patterson.