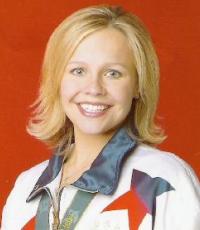 Determination and perseverance best personify Amanda Borden.  After years of hard work, sacrifice and dedication to her sport of gymnastics, Amanda could have easily followed a different path after nearly missing the 1992 Olympic team. However, Amanda persevered and believed in herself and along her journey to Olympic gold she became a three time World Championship team member, a Pan-American double gold medalist, a six time national team member, and the 1995 USAG Sportswoman of the Year.

Amanda also enjoys motivational speaking to young and old and is honored to be considered a role model.  Having to overcome injuries and being an elite athlete while being in the public eye most of her young life, Amanda is well prepared and excited to be an example for anyone young or old, male or female who has a dream and goes for it!  Amanda has been active in Special Olympics, Duchene's Parent Project for Muscular Dystrophy, USAG's Athletes Advisory Council and a board member for the recent 2012 Olympic endeavor for Cincinnati.  She was honored in 2000 as one of the "Ten Outstanding Young Cincinnatians" by the Cincinnati branch of the Jaycees and their nominee and a runner up for the national "Ten Outstanding Young Americans."  In 2003 Amanda received the Pop Warner Female Achievement Award.

Secure Amanda Borden for Your Event

Based on your interest in Amanda Borden as a speaker or for a personal appearance, Direct Sportslink has provided you additional links below for other sports talent with similar appearance fees, speaker topics, and categories that match Amanda Borden.