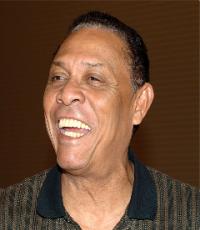 He was voted to the Baseball Hall of Fame; He was a 7-time All-Star; He helped guide the Cincinnati Reds to the World Series 4 times in 7 years
Fee Range: $5,000 - $10,000
Secure Tony Perez
for Your Event

Tony Perez was a seven time All-Star who was voted the Most Valuable Player of the 1967 All-Star Game. Beginning in 1970, the Reds went to the World Series four times in seven years, winning back-to-back world championships in 1975 and 1976, with Pérez as a starting player. Pèrez was one of the premier RBI men of his generation, driving in 100 or more runs seven times in his 23-year long career.

In an eleven-year stretch from 1967 to 1977, Pérez drove in 90 or more runs each year, with a high of 129 RBIs in 1970. He was second among all major-leaguers in RBI, with 954, behind only his teammate Johnny Bench. Pérez also hit the first home run in Pittsburgh's Three Rivers Stadium.

Based on your interest in Tony Perez, we have also provided you the sports speaker website pages for his former Cincinnati Reds teammates Pete Rose and Joe Morgan.

Secure Tony Perez for Your Event

Based on your interest in Tony Perez as a speaker or for a personal appearance, Direct Sportslink has provided you additional links below for other sports talent with similar appearance fees, speaker topics, and categories that match Tony Perez.