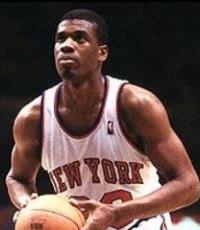 King averaged 25.8 points per game in three years as a starter at the University of Tennessee and led NCAA Division I schools with a .622 field goal percentage as a sophomore. He left school after his junior year to enter the 1977 NBA draft.

He was chosen in the second round by the New Jersey Nets and averaged 24.2 points per game to make the all-rookie team. A 6-foot-7, 205-pound forward, King was traded to the Utah Jazz in 1979 but missed most of the season with a knee injury and was sent to the Golden State Warriors.

Because of a career-threatening knee injury, King missed all of the 1985-86 season and played in only 6 games in 1986-87. He was released by the Knicks and signed with the Washington Bullets in 1987.

Secure Bernard King for Your Event

Based on your interest in Bernard King as a speaker or for a personal appearance, Direct Sportslink has provided you additional links below for other sports talent with similar appearance fees, speaker topics, and categories that match Bernard King.