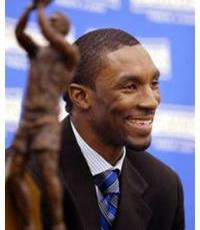 Thank you Direct Sportslink - The Ben Gordon event was one of the most successful events ever for the Illinois Institute of Technology's Union Board!

Gordon played guard on the University of Connecticut men's basketball team where he was the leading scorer for the 2004 Big East Tournament and NCAA Division I Champion Connecticut Huskies.

Following that, his Junior season, Gordon declared himself eligible for the 2004 NBA Draft and was selected third overall by the Chicago Bulls.

He became the first rookie in NBA history to be selected winner of the NBA Sixth Man Award. Ben has also received the NBA's East Rookie of The Month Honors 3 times (January, February, and March). Ben made the NBA All-Rookie First Team.

Gordon signed a five-year deal for $55 million with the Detroit Pistons starting with the 2009–10 season. With the Pistons, Gordon continued his role as a sixth-man off the bench. On January 9, 2010, Gordon scored the 10-millionth point in NBA history. On March 21, 2012, Gordon scored 45 points, making 9 out of 9 3-point field goal attempts, which tied an NBA record. He was traded to the Charlotte Bobcats in 2012.

Secure Ben Gordon for Your Event

Based on your interest in Ben Gordon as a speaker or for a personal appearance, Direct Sportslink has provided you additional links below for other sports talent with similar appearance fees, speaker topics, and categories that match Ben Gordon.