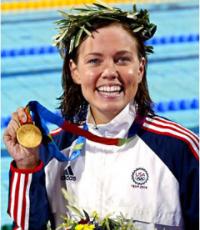 At the 2008 Olympics, she became the first American female athlete in modern Olympic history to win six medals in one Olympics and the first woman ever to win a 100 m backstroke gold in two consecutive Olympics
Fee Range: $10,000 - $20,000
Secure Natalie Coughlin
for Your Event

At the Beijing Olympics, Coughlin became the first American female athlete in modern Olympic history to win six medals in one Olympics and the first woman ever to win a 100 m backstroke gold in two consecutive Olympics.

Coughlin is known for her dominance in a short course pool and for her underwater kicking ability. She holds World, American and US Open records in various events and has eleven Olympic medals. She was the first woman to go under 59 seconds in the long course 100 m backstroke.

Prior to the 2004 Olympics, she was a student-athlete at Carondelet High School in Concord CA, Diablo Valley College in Pleasant Hill, California, then later at the University of California, Berkeley, where she earned a BA in psychology in 2005. She had won twelve National Collegiate Athletic Association Swimmer of the Year honors in her first three years at the university.

At the 2008 Summer Olympics, Coughlin became the first American female athlete in modern Olympic history to win six medals in one Olympics.

Secure Natalie Coughlin for Your Event

Based on your interest in Natalie Coughlin as a speaker or for a personal appearance, Direct Sportslink has provided you additional links below for other sports talent with similar appearance fees, speaker topics, and categories that match Natalie Coughlin.