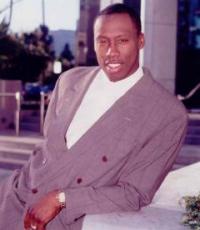 An Al Joyner personal appearance, Al Joyner speaking engagement, or Al Joyner endorsement will reflect well on your company. To hire Al Joyner now for any corporate appearance, fundraiser, motivational speaker event, personal appearance, autograph signing, or website endorsement please contact our celebrity agents at 1-877-6-SPORTS. We will contact Al Joyner or contact Al Joyner's agent and provide you with the booking fees and availability immediately upon your request. Direct Sportslink is the only sports speakers bureau and talent booking agency based in the United States securing only sports talent for corporations, associations, and organizations for motivational speaking engagements, personal appearances, and endorsements. We are the premier sports celebrity booking agency and a sports celebrity procurement expert. Accordingly, we will provide you with any relevant Al Joyner website information and booking agent details so that you can hire Al Joyner for your next event.

A star athlete at Lincoln High School in East St. Louis, Illinois, Alfredrick "Al" Joyner went on to attend Arkansas State University. He competed with their track and field team throughout his college career, and by the time he graduated Al was a three-time NCAA All-American indoor champion, a three-time NCAA All-American outdoor champion, a four-time Southland Conference champ and had placed 8th in the triple jump at the World Championships in Helsinki, Finland.

In 1984, Al traveled to Los Angeles for the Summer Games to compete with the U.S. Olympic track and field team. With a leap of 56'-7.5", he became the first American in 80 years to win a gold medal in the triple jump. Al was also honored with the Jim Thorpe Award, which is given every four years to the best American competitor in an Olympic Field Event. That same year, Al cheered his sister Jackie Joyner Kersee as she competed in the heptathlon. When she captured a silver in the event, they became the first sibling teammates in U.S. history to medal during the same Olympics.

On October 10, 1987 Al married track legend Florence Griffith, later known as Flo Jo. The two met in 1980 at the Olympic trials registration and felt an instant connection. Al later assisted his brother-in-law, Bob Kersee, in coaching Florence to gold medals in the 100, 200 and 400-meter relay. Sadly, to the shock of Al and the couple's daughter Mary Ruth, Florence died from an epileptic seizure at the age of 38 in 1998.

After his wife's tragic death, Al began traveling to promote her newly published book, "Running for Dummies," and jump-start the Florence Griffith Joyner charity/scholarship fund. He also began directing the Flo Jo Community Empowerment Foundation, an organization dedicated to making dreams come true for the youth around the world. One dollar from every sale of "Running for Dummies" is donated to this foundation.

Secure Al Joyner for Your Event

Based on your interest in Al Joyner as a speaker or for a personal appearance, Direct Sportslink has provided you additional links below for other sports talent with similar appearance fees, speaker topics, and categories that match Al Joyner.