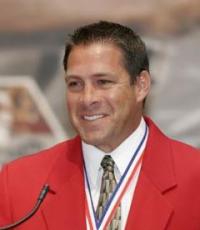 Caligiuri attended UCLA from 1982 to 1985, was named an NCAA All-American twice, was named 1986 U.S. Soccer Athlete of the Year, and captained the Bruins to an NCAA Championship his junior year. While at UCLA Caligiuri also earned his first cap for the national team, playing October 9, 1984 against El Salvador. Caligiuri would eventually tally 110 appearances for the United States, and would add five goals from his position in the midfield. Caligiuri was a central figure to the national team throughout the 80's up to the mid-90's, and would start every match in both the 1990 and 1994 World Cups, playing his final game in 1997, thirteen years after his debut.

Caligiuri finished his MLS career with 9 goals and 14 assists, accumulated over 135 games, 123 of which were starts.

In 2004, Caligiuri was elected into the United States National Soccer Hall of Fame, along with Michelle Akers and Eric Wynalda. He currently serves as an athlete representative on the Board of Directors of the United States Soccer Federation.

He coached the Cal Poly Pomona men's soccer team through 2008.

Secure Paul Caliguiri for Your Event

Based on your interest in Paul Caliguiri as a speaker or for a personal appearance, Direct Sportslink has provided you additional links below for other sports talent with similar appearance fees, speaker topics, and categories that match Paul Caliguiri.