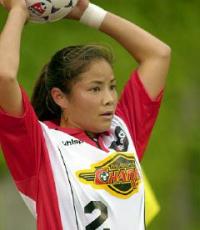 At UNC, she was picked as one of Soccer America's freshmen of the year, and she helped lead UNC to the 1996 NCAA championship.

She joined the Under 20 national team in 1994, playing, among other events, in the Nordic Cup. In 1995, she was a member of the West Team at the US Olympic Festival, and she started practicing for the National team. She impressed so much during practice that she was named an alternate for the

1996 Atlanta Olympic Games team that won the Gold. Soon after, she was able to make her debut on the team as an official player.

In 1999, Fair, helped take the team to that year's FIFA Women's World Cup.

Since 2008, Fair has worked with several projects, such as Charlize Theron's Africa Outreach Project and her own Kickabout Africa 2010 project, to promote development efforts in Africa

Secure Lorrie Fair for Your Event

Based on your interest in Lorrie Fair as a speaker or for a personal appearance, Direct Sportslink has provided you additional links below for other sports talent with similar appearance fees, speaker topics, and categories that match Lorrie Fair.