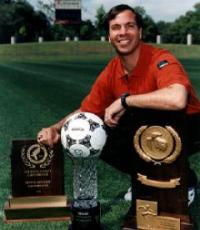 He is undisputedly the most successful coach in United States men's soccer history
Fee Range: $10,000 - $20,000
Secure Bruce Arena
for Your Event

Before rising to international stature, Arena was an enormously successful college soccer coach at the University of Virginia. Arena was the head coach of the Virginia program for 18 years, during which he won five national championships and amassed an amazing 295-58-32 record. Additionally, he coached and developed many players who would go on to play significant roles in the United States national team, including Claudio Reyna, Jeff Agoos, John Harkes, Tony Meola, and Richie Williams.

Arena left UVA. to become the coach of D.C. United for their, and Major League Soccer's, inaugural season in 1996. Arena would lead United to MLS Cup victories in both of the league's first two years, and would win the MLS Coach of the Year Award following his second victory, before losing to the expansion Chicago Fire and his protege Bob Bradley in the 1998 MLS Cup final.

Arena was hired by the U.S. national team to replace Steve Sampson as head coach in October 1998 following the team's disastrous showing in the 1998 World Cup. He forged the team into a successful international side, and is undisputedly the most successful coach in United States history: most international wins; longest home shut-out; best World Cup showing since 1930, reaching the quarterfinals at the World Cup, before a close defeat against Germany; and all-time best international FIFA Ranking (6th place).

Secure Bruce Arena for Your Event

Based on your interest in Bruce Arena as a speaker or for a personal appearance, Direct Sportslink has provided you additional links below for other sports talent with similar appearance fees, speaker topics, and categories that match Bruce Arena.