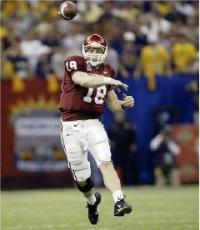 After suffering from consecutive anterior cruciate ligament tears and reconstructive knee surgeries on both knees during the 2001 and 2002 seasons, White won the Heisman Trophy in 2003 after throwing 40 touchdown passes and 8 interceptions. White was also the recipient of the Associated Press Player of the Year, consensus All-American, consensus Big 12 Offensive Player of the Year, the Davey O'Brien Award and the Jim Thorpe Courage Award in his 2003 season. He was awarded a medical hardship by the NCAA and allowed to play a second senior year in 2004.

White was again a finalist for the Heisman Trophy in 2004, trying to become just the second player after Archie Griffin to win the honor twice, but instead finished third. White did win the Davey O'Brien Award for the second straight year, becoming the third quarterback ever to win the prestigous award two years in a row. He led the Sooners to the Big 12 championship game in 2003. With the help of the second place Heisman Trophy finisher Adrian Peterson, White took the Oklahoma Sooners to the national championship game once more, the Orange Bowl, in 2004. White finished his collegiate career as the University of Oklahoma's all-time leader in career passing yards (8,012) and touchdown passes (81).

White's on-the-field accomplishments have been further honored in Tuttle, OK with the painting of a local water tower to read "Home of Jason White 2003 Heisman Trophy Winner". This tower is readily seen from the center of town, just west of State Highways 4 and 37. Additionally, a section of Cimarron Road in the city was renamed "Jason White Boulevard".

White has owned and operated Jason White Companies, which owned A Store Divided, an OU/OSU memorabilia store, and a The Athlete's Foot shoe store. He also worked with insurance agent Steve Owens, another former Sooner Heisman Trophy winner and former athletic director at the University of Oklahoma. Prior to that, White worked briefly for a securities firm in downtown Oklahoma City. He has expressed a possible interest in coaching sometime in the future.

In 2007, a bronze statue of White was dedicated on the University of Oklahoma campus in Heisman Park, commemorating his 2003 award.

Secure Jason White for Your Event

Based on your interest in Jason White as a speaker or for a personal appearance, Direct Sportslink has provided you additional links below for other sports talent with similar appearance fees, speaker topics, and categories that match Jason White.