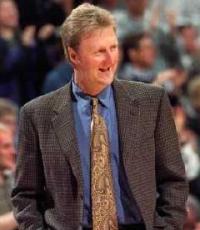 He is a basketball legend and one of the greatest to ever play the game; He is a member of The Basketball Hall of Fame
Fee Range: $50,000 - $75,000
Secure Larry Bird
for Your Event

Once every generation or so, a player comes along who can truly be called a superstar. Larry Bird was such a player. For 13 seasons with the Boston Celtics, from 1979-80 through 1991-92, Bird personified hustle, consistency and excellence in all areas of play--as a scorer, a passer, a rebounder, a defender, a team player, and, perhaps above all, as a clutch performer.

Bird helped rebuild a Celtics franchise that had been suffering from substandard play and poor attendance in the late 1970s. With Bird as the focal point of a well-rounded squad, the Celtics won three NBA titles and 10 Atlantic Division crowns.

In addition to his three championship rings, Bird piled up an awesome collection of personal achievements. He became only the third player (and the first non-center) to win three consecutive NBA Most Valuable Player Awards. He was a 12-time All-Star, a two-time NBA Finals MVP and a nine-time member of the All-NBA First Team. He led the league in free-throw percentage four times.

"Larry Bird has helped define the way a generation of basketball fans has come to view and appreciate the NBA," said Commissioner David J. Stern when Bird retired due to a painful back condition in 1992, after capturing a gold medal with the original Dream Team at the Olympics in Barcelona.

After retiring from playing, Bird took a position working in a front office senior level capacity with the Indiana Pacers where he was named 2012 NBA Executive of the Year. He resigned from the Pacers in 2012 but rejoined them in 2013. He is an avid outdoorsman with a passion for country music, auto racing, and golf.

Secure Larry Bird for Your Event

Based on your interest in Larry Bird as a speaker or for a personal appearance, Direct Sportslink has provided you additional links below for other sports talent with similar appearance fees, speaker topics, and categories that match Larry Bird.