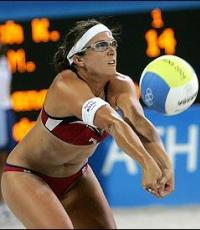 Direct Sportslink's client was hosting an event with an Olympic theme in California. Misty gave a motivational speech to the New Holland sales and marketing team followed up by a meet and greet. As a special treat, Misty brought her Olympic Gold Medals for viewing.

Misty May-Treanor is a professional beach volleyball player. She graduated from California State University, Long Beach, where she won a national championship, received the Athlete of the Year Award in 1998, and was on the All American First Team for three years. In 2003, May and her new teammate Kerri Walsh were named the Association of Volleyball Professionals (AVP) Team of the Year after having an undefeated season at 39-0, winning eight tournaments.

In the 2000 Summer Olympics, May teamed with Holly McPeak, a highly ranked U.S. beach volleyball player, and they finished in fifth place. In the 2004 Summer Olympics with teammate Kerri Walsh, the number one ranked player, May won Gold after she and Walsh defeated the Brazilian team in the finals. McPeak teamed up with Elaine Youngs and won the bronze medal, after losing to May and Walsh in the semifinal round. May and Walsh did not lose a single game in their seven matches over the 2004 Olympics.

On August 21, 2008 May-Treanor and Walsh repeated as Olympic gold medalists, defeating the first-seeded Chinese team in two games. In the summer of 2012, Misty and Kerri won their third straight Olympic Gold Medal.

Secure Misty May Treanor for Your Event

Based on your interest in Misty May Treanor as a speaker or for a personal appearance, Direct Sportslink has provided you additional links below for other sports talent with similar appearance fees, speaker topics, and categories that match Misty May Treanor.