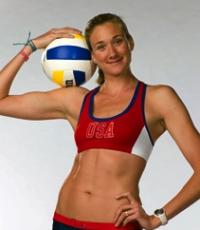 She is considered one of the greatest beach volleyball players
Fee Range: $20,000 - $30,000
Secure Kerri Walsh
for Your Event

Kerri Walsh Jennings was born in Santa Clara, California. As a high school student, Walsh played indoor volleyball at Archbishop Mitty High School in San Jose, California. She graduated in 1996. There, she led her team to three state championships in indoor volleyball from 1993 to 1995. She also led her team to one state championship in basketball in 1995. In 1996, she was named by G (ESPNHS) as their first girl's national volleyball player of the year.

Walsh continued on to Stanford University, where she won national titles in 1996 and 1997 and was a four-year first-team All-American and co-National Player of the Year. She graduated from Stanford in 2000 with a B.A. in American studies.
Kerri and teammate Misty May-Treanor (click here to view Direct Sportslink's appearance booking with Misty May-Treanor) were the Olympic Gold Medalists in beach volleyball at the 2004, 2008, and 2012 Summer Olympics. They have been called "the greatest beach volleyball team of all time."
Athens 2004
At the 2004 Summer Olympics, Walsh and Misty May-Treanor won the gold medal in women's beach volleyball without losing a single set.
Beijing 2008
On August 21, 2008 Walsh Jennings and May-Treanor repeated as Olympic gold medalists, defeating the first-seeded Chinese team in the final match (they would have been first-seeded, but home rule put them in the #2 spot with China as the #1). May-Treanor and Walsh did not lose a set in either of the past two Olympics. Their final match extended their unbeaten streak to 108 matches.
London 2012
Walsh and May-Treanor competed together for the last time in the 2012 Summer Olympics in London. After first and second round wins, they continued their Olympic win streak of 32 consecutive sets without a loss until losing the first set of three to Austria in a preliminary round before ultimately winning the match, 17–21; 21–8; 15–10. They went on to defeat fellow Americans Jen Kessy and April Ross, 21–16, 21–16 on August 8, 2012 to win the gold medal once again.
Secure Kerri Walsh for Your Event

Based on your interest in Kerri Walsh as a speaker or for a personal appearance, Direct Sportslink has provided you additional links below for other sports talent with similar appearance fees, speaker topics, and categories that match Kerri Walsh.