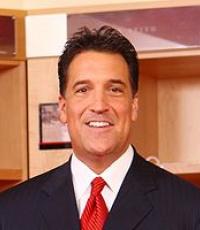 He has been a collegiate head coach at several major Division 1 schools
Fee Range: $10,000 - $20,000
Secure Steve Lavin
for Your Event

Steve Lavin has been the Head Coach for UCLA and St. John's. At UCLA from 1996 to 2003, Lavin compiled a record of 145–78. In his inaugural season as head coach, he directed the Bruins to the 1997 Pac-10 Championship and the NCAA Elite Eight with an overall record of 24–8. As both an assistant and head coach, Lavin participated in 13 consecutive NCAA tournament appearances (1990–2002), while working at Purdue University and UCLA. During Lavin's tenure as a head coach, he was one of only a few coaches in the country, to lead his team to five NCAA "Sweet 16s" in six years ('02, '01, '00, '98, '97). Lavin guided UCLA to six consecutive seasons of 20 or more wins, as well as six consecutive NCAA tournament appearances.

In 2010, Lavin was hired as the head men's basketball coach at St. John's University. In his first season at St. John's, he led the university to its first spot in the NCAA Tournament since 2002. He agreed to leave St. John's in 2015 having coached them to two NCAA appearances and two NIT appearances. He missed one season at St. john's while recovering from cancer.

Secure Steve Lavin for Your Event

Based on your interest in Steve Lavin as a speaker or for a personal appearance, Direct Sportslink has provided you additional links below for other sports talent with similar appearance fees, speaker topics, and categories that match Steve Lavin.