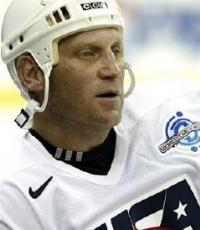 He is one of the top goal scorers in NHL history; He played on 2 Stanley Cup Champions (Dallas Stars and Detroit Red Wings)
Fee Range: Contact Us
Secure Brett Hull
for Your Event

Brett is a former NHL player, and the son of legendary player Bobby Hull.

While playing for the St. Louis Blues of the NHL, Hull developed into a prolific goal scorer with linemate Adam Oates and the duo were dubbed "Hull n Oates" (a play on the well-known musical duo of Hall & Oates). In Hull's best season, 1990-91, he scored 86 goals, the third highest mark ever recorded in one season. That year he was awarded the Hart Memorial Trophy as the NHL's Most Valuable Player.

Hull played eleven seasons for St. Louis before signing with the Dallas Stars as a free agent before the 1999 season. He helped the team capture the Stanley Cup that season. Hull later won the Stanley Cup again in 2002 with the Detroit Red Wings.

The colorful and often outspoken Hull announced his retirement on October 15, 2005 with 741 career goals, placing him third on the all-time list. Hull was inducted into the U.S. Hockey Hall of Fame on October 29, 2008. Hull and his father Bobby became the first ever father-son hockey duo ever to achieve this honor.

Secure Brett Hull for Your Event

Based on your interest in Brett Hull as a speaker or for a personal appearance, Direct Sportslink has provided you additional links below for other sports talent with similar appearance fees, speaker topics, and categories that match Brett Hull.