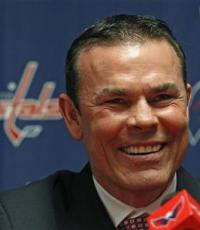 He is a member of the Hockey Hall of Fame
Fee Range: Contact Us
Secure Adam Oates
for Your Event

Adam Oates started his hockey career in 1982 at Rensselaer Polytechnic Institute in Canada.  Oates led the team in assists every year and was the first RPI hockey player to become an NCAA All-American.

In 1985 Oates signed with the NHL team the Detroit Red Wings. He went on to score 54 points in 63 games the following year. Oates was traded to the St. Louis Blues in 1989, the same year he topped the 100-point mark for the first time in his career.

Oates joined the Boston Bruins in 1992 and led the league with 97 assists and 142 points. In 1994, Oates played in his fourth consecutive All-Star Game, scoring 112 points that season. In 1997 Oates signed with the Washington Capitals, where exceeded 1,000 career points and assists.

After his retirement, Oates was inducted into the Hockey Hall of Fame in 2012. That same year he became the head coach for Washington, leading his team to the 2013 Stanley Cup playoffs.

Secure Adam Oates for Your Event

Based on your interest in Adam Oates as a speaker or for a personal appearance, Direct Sportslink has provided you additional links below for other sports talent with similar appearance fees, speaker topics, and categories that match Adam Oates.