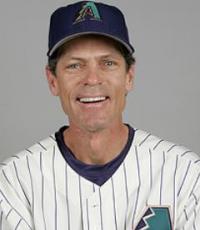 He is best known for overcoming cancer while playing professional baseball; His 1997 autobiography is titled, "Field of Hope"
Fee Range: $5,000 - $10,000
Secure Brett Butler
for Your Event

Brett Morgan Butler (born June 15, 1957 in Los Angeles, California) is a former center fielder in Major League Baseball who played for five different teams from 1981 to 1997.

After attending Southeastern Oklahoma, Butler was drafted in the 23rd round of the 1979 amateur draft by the Atlanta Braves. After playing in the minor leagues, he made his major league debut with the Braves on August 20, 1981. He was traded to the Cleveland Indians as part of a multiple-player deal in 1984, and signed with the San Francisco Giants as a free agent in 1987. Playing for the Giants, he established himself as one of the premier leadoff hitters in the National League.

Following the 1990 season, Butler signed a contract with Los Angeles Dodgers. As a member of the Dodgers from 1991-1995, Butler reached the prime of his career. In his first year as a Dodger (1991), Butler earned a roster spot on the National League All-Star team, and finished 7th in MVP voting. During the 1995 season, Butler was signed as a free agent by the New York Mets. In August 1995, Butler rejoined the Dodgers.

In May 1996, Butler learned that he was suffering from throat cancer; following an operation to remove the tumor, and intensive treatment to combat the disease, he returned to the Dodgers' lineup in September of the same year--defying the predictions of those who had speculated he would never be able to play again. Butler finished the 1996 season with the Dodgers and played with them for one more year, participating in his final game on September 28, 1997.

Butler, a born-again Christian, has been active in a number of Christian and Pro-Life causes.

Secure Brett Butler for Your Event

Based on your interest in Brett Butler as a speaker or for a personal appearance, Direct Sportslink has provided you additional links below for other sports talent with similar appearance fees, speaker topics, and categories that match Brett Butler.