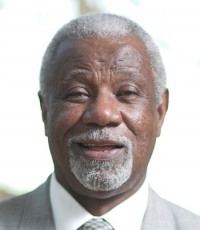 Nolan Richardson for Waddell and Reed

Direct Sportslink secured former Arkansas Head Basketball Coach Nolan Richardson for Waddell and Reed's corporate hospitality event centered around March Madness. Direct Sportslink has worked with Waddell and Reed on numerous events securing past Final Four legends, Heisman Trophy winners and Super Bowl MVP's. For this specific event, Coach Richardson gave a motivational speech, answered questions, and greeted all the employees while signing basketballs for charity during the entire evening of the first round NCAA basketball games. To hire Nolan Richardson for any motivational speaking engagement, personal appearance or endorsement please contact the celebrity booking agents at Direct Sportslink. We work directly with Nolan to hire him for any event.

Coach Richardson was born in El Paso, Texas. He played collegiately at Texas Western College (now the University of Texas at El Paso) playing for two years under the future Basketball Hall of Famer Don Haskins.

Coach Richardson began his coaching career at Bowie High School in El Paso, Texas. He then moved to Western Texas College, where he won the National Junior College championship in 1980. He was the head coach at Tulsa from 1981 to 1985, leading Tulsa to the NIT championship in 1981. In 1985 Richardson became the head coach at the University of Arkansas, where he gained national recognition.

Richardson took the University of Arkansas to the Final Four three times, losing to Duke in the semifinals in 1990, winning the National Championship in 1994 against Duke, and losing in the Championship game to UCLA in 1995. He was named the National Coach of the Year in 1994. His teams typically played an up tempo game with intense pressure defense - a style that was known as "40 Minutes of Hell." He is the winningest coach in Arkansas history, compiling a 389-169 record in 17 seasons.

Coach Nolan Richardson was elected to the National Collegiate Basketball Hall of Fame in 2008. On October 20, 2009, Richardson was named head coach of Women's National Basketball Association's Tulsa Shock, formerly known as the Detroit Shock, a position he held until July 8, 2011.

Secure Nolan Richardson for Your Event

Based on your interest in Nolan Richardson as a speaker or for a personal appearance, Direct Sportslink has provided you additional links below for other sports talent with similar appearance fees, speaker topics, and categories that match Nolan Richardson.