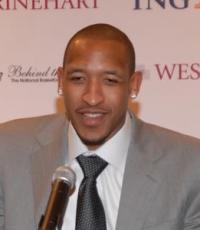 He finished his basketball career at Duke University as the all-time leader in steals and minutes played
Fee Range: $5,000 - $10,000
Secure Chris Duhon
for Your Event

Thanks for all your work securing Chris Duhon for our basketball camp. Even with a cancellation from another player with short notice Direct Sportslink came through for us with Chris and he was one of the best NBA guests we had over the years. Thanks for all your work over the years securing Ty Lawson, James Jones and Shannon Brown and other NBA stars.

In his senior year at Salmen High School in Slidell, Louisiana, Duhon was voted Mr. Basketball for the state of Louisiana.

Duhon arrived at Duke University in 2000, where he was an important role player, playing backup to point guard Jay Williams. Following the injury of teammate Carlos Boozer, Duhon was placed into the starting lineup as point guard, with Williams moving to shooting guard, a combination in which Duhon played well. The Duke Blue Devils went on to win the 2001 national championship, defeating Arizona in the finals. Duhon finished his career as Duke's all-time leader in steals (300) and minutes played (4,813), and second in assists (819). In Duhon's four years, Duke compiled a 123–21 record, making Duhon the second winningest player in Duke and Atlantic Coast Conference history at the time, behind Duke's Shane Battier (131 wins). He helped the Blue Devils win three ACC Championships. Duhon was a finalist for the 2004 Wooden Award, the Naismith Award, and Rupp Trophy awards. He left as the only Atlantic Coast Conference player to record 1,200 points, 800 assists, 475 rebounds, 300 steals, and 125 three-point shots.

In June 2004, Duhon was selected as the 38th pick in the 2004 NBA Draft by the Chicago Bulls. He has since played for several NBA teams including the New York Knicks, Orlando Magic and Los Angeles Lakers.

Secure Chris Duhon for Your Event

Based on your interest in Chris Duhon as a speaker or for a personal appearance, Direct Sportslink has provided you additional links below for other sports talent with similar appearance fees, speaker topics, and categories that match Chris Duhon.