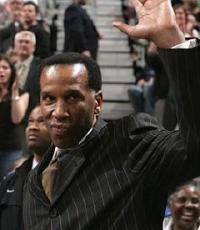 He is a six-time NBA All-Star; He has been inducted into the Naismith Basketball Memorial Hall of Fame
Fee Range: $10,000 - $20,000
Secure Adrian Dantley
for Your Event

Dantley led Notre Dame in scoring in 1974-75 (30.4 points per game) and 1975-76 (28.6 points per game), while also leading the team in rebounding those two seasons with marks of 10.2 and 10.1 rebounds per game, respectively. He was also the leading scorer on the 1976 U.S. Olympic team that captured the gold medal in Montreal and was drafted sixth overall, by the Buffalo Braves, in the 1976 NBA draft. He became the third Buffalo player in five years to receive the NBA Rookie of the Year Award when he won it after the 1977 season. Dantley remains the only Rookie of the Year in any major sport to be traded after his rookie year.

In Utah, Dantley reached his peak, establishing his reputation as a prolific scorer. With Utah, he twice led the league in scoring (in 1981 and 1984). He averaged over 30 points per game each season between 1981 and 1984, though he missed 60 games in 1983 after tearing ligaments in his right wrist. In his seven years with the Utah Jazz, Dantley picked up all six of his All-Star appearances and two All-NBA second-team honors.

Dantley's uniform number (#4) was retired by Utah on April 11, 2007, and it was announced on April 7, 2008 that he would be elected to the Basketball Hall of Fame, 16 years after his retirement.

Secure Adrian Dantley for Your Event

Based on your interest in Adrian Dantley as a speaker or for a personal appearance, Direct Sportslink has provided you additional links below for other sports talent with similar appearance fees, speaker topics, and categories that match Adrian Dantley.