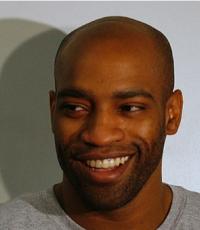 He was the 1999 NBA Rookie of the Year; He won the 2000 All-Star Slam Dunk Contest
Fee Range: Contact Us
Secure Vince Carter
for Your Event

A high school McDonald's All-American, Carter played three years at the University of North Carolina. While there, he twice reached the Final Four of the NCAA Tournament before being selected as the fifth overall pick in the 1998 NBA Draft by the Golden State Warriors, who traded him to the Toronto Raptors. He won the 1999 NBA Rookie of the Year Award and won the Slam Dunk Contest at the 2000 NBA All-Star Game the following season. That summer, he represented the United States in the Summer Olympics, winning a gold medal.

He quickly emerged as a league star, entertaining crowds with his leaping ability and slam dunks, earning him nicknames such as "Vinsanity," "Air Canada," and "Half-Man, Half-Amazing."

Off the court, Carter established his Embassy of Hope Foundation, assisting children and their families in Florida, New Jersey and Toronto. He was recognized in 2000 as Child Advocate of the Year by the Children's Home Society, and received the Florida Governor's Points of Light award in 2007 for his philanthropy in his home state.

Secure Vince Carter for Your Event

Based on your interest in Vince Carter as a speaker or for a personal appearance, Direct Sportslink has provided you additional links below for other sports talent with similar appearance fees, speaker topics, and categories that match Vince Carter.