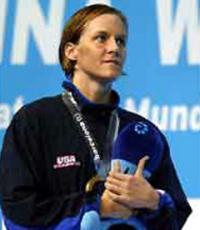 She is one of the most decorated Olympians in history winning twelve medals, including eight golds while competing in four Olympics
Fee Range: $10,000 - $20,000
Secure Jenny Thompson
for Your Event

Thompson first appeared on the international scene as a 14-year-old in 1987, when she won the 50-meter freestyle and placed third in the 100m freestyle at the Pan American Games. She won her first world championship in 1991, as part of the USA's winning 4x100 free relay team, and held the world record in the 50 and 100 free when she participated in the 1992 Olympics in Barcelona, Spain. Thompson won two gold medals as part of the 4x100 free and 4x100 medley teams.

Thompson continued her career as a part of the U.S. team and a member of the Stanford University team, and continued to rank among the world's best swimmers for the next four years.

Between 1997 and 1999, Thompson won eight more world championship titles, including three in a row in the 100 free, and went to the 2000 Olympics in Sydney, Australia hoping to finally win that elusive individual gold medal. She won a bronze in the 100 free and was fifth in the 100 butterfly. But in the relay events, she was super as usual - swimming the anchor leg in helping the USA defend its titles in the 4x100 free and medley and the 4x200 free. The 4x100 free and medley teams set new world records in the process.

Thompson seemingly retired from competition after the 2000 season with 10 Olympic medals, eight gold, one silver and one bronze, and 12 gold medals at World Championships. However, she returned to competition the summer of 2002 at the Pan Pacific Swimming Championships in Yokohama, Japan. Thompson won five medals in two days, setting a career-best time in winning the 50 freestyle. At the 2003 World Championships, she would win five medals, including two gold.

At the 2004 Olympics at age 31, she was the anchor member of the 400-meter freestyle relay, she helped set a national record of 3:36.39. Since retiring, she has worked as an anesthesiologist and volunteered as a swimmer for Swim Across America.

Secure Jenny Thompson for Your Event

Based on your interest in Jenny Thompson as a speaker or for a personal appearance, Direct Sportslink has provided you additional links below for other sports talent with similar appearance fees, speaker topics, and categories that match Jenny Thompson.