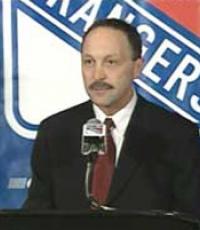 He is a member of the Hockey Hall of Fame; He played on six Stanley Cup Championship teams
Fee Range: Contact Us
Secure Bryan Trottier
for Your Event

Drafted by the New York Islanders in 1974, Trottier played his first fifteen seasons in New York.

After fifteen years with New York he was picked up as a free agent by the Pittsburgh Penguins where he played his remaining three seasons winning two more cups in 1991 and 1992. He retired in 1994.

In 1997, he was inducted into the Hockey Hall of Fame in his first year of eligibility. In 2001, Trottier was an Assistant Coach for the Stanley Cup winning Colorado Avalanche.  On June 1, 2006, he was named the Islanders' Executive Director of Player Development.

Secure Bryan Trottier for Your Event

Based on your interest in Bryan Trottier as a speaker or for a personal appearance, Direct Sportslink has provided you additional links below for other sports talent with similar appearance fees, speaker topics, and categories that match Bryan Trottier.