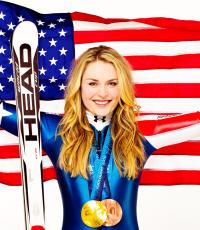 She won a gold and bronze medal at the 2010 Winter Olympics; She won two gold medals at the 2009 World Championships
Fee Range: Contact Us
Secure Lindsey Vonn
for Your Event

Vonn is one of a few women to have won World Cup races in all five disciplines of alpine skiing – downhill, super G, giant slalom, slalom, and super combined – and has won 59 World Cup races in her career through the end of the 2013 Alpine Skiing World Cup. Vonn received the Laureus World Sports Awards Sportswoman of the Year for 2010. She was also honored again as the USOC's sportswoman of the year for 2010.

Secure Lindsey Vonn for Your Event

Based on your interest in Lindsey Vonn as a speaker or for a personal appearance, Direct Sportslink has provided you additional links below for other sports talent with similar appearance fees, speaker topics, and categories that match Lindsey Vonn.