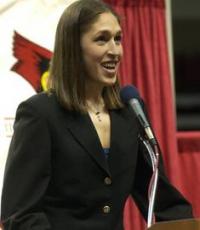 Rebecca Lobo attended the University of Connecticut and helped lead the Huskies to the 1995 National Championship with an undefeated 35-0 record. In her senior year, she won the 1995 Naismith and College Player of the Year awards.

In 1996, Lobo and her mother, RuthAnn Lobo, collaborated on a book entitled The Home Team, which dealt with RuthAnn's battle with breast cancer.

She was assigned to the New York Liberty, during the WNBA's first player allocations on January 22, 1997. She spent her career with New York, Houston, and  Connecticut until 2003.

Since retiring from playing, Lobo has spent her time as a color analyst for NBA-TV for primarily WNBA games. She has also announced and commentated women's and men's college basketball games as well.

Secure Rebecca Lobo for Your Event

Based on your interest in Rebecca Lobo as a speaker or for a personal appearance, Direct Sportslink has provided you additional links below for other sports talent with similar appearance fees, speaker topics, and categories that match Rebecca Lobo.