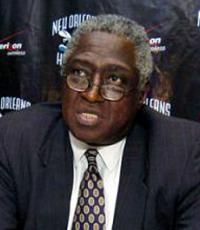 Willis Reed, Jr. played for the New York Knicks in the NBA for his entire career. In his first years he held the power forward position, then he gained fame as the starting center.

Despite his average stature (he stood at a mere 6 ft 9 in, when, for instance, his contemporaries Wilt Chamberlain or Lew Alcindor stood at 7 ft 1 in and 7 ft 2 in respectively ), Reed enjoyed a brilliant career with the Knicks, winning two championship rings, in 1970 and 1973 and one MVP award in 1970.

Reed's most famous performance took place on May 5, 1970, during Game 7 of the NBA Finals against the Los Angeles Lakers in Madison Square Garden. Despite a severe thigh injury, he started the game in front of a thrilled audience, won the tip-off, and scored the first two baskets of the game. The Knicks won the game 113-99, giving New York City its first ever NBA title.

For all his achievements, he was enshrined in the Basketball Hall of Fame in 1982. He is widely considered as one of the greatest Knicks ever, with the likes of Walt Frazier and Patrick Ewing.

Secure Willis Reed for Your Event

Based on your interest in Willis Reed as a speaker or for a personal appearance, Direct Sportslink has provided you additional links below for other sports talent with similar appearance fees, speaker topics, and categories that match Willis Reed.