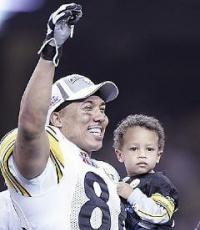 As a wide receiver for the University of Georgia Bulldogs (1995-1998), Ward played tailback and quarterback, and totalled 3,870 all-purpose yards, second only to Herschel Walker in Bulldogs history. Since being drafted by the Pittsburgh Steelers in the third round of the 1998 NFL Draft, he has earned three team Most Valuable Player (MVP) selections. He is also a four-time consecutive NFL Pro Bowl selection (2001-2004).

On February 5, 2006, Ward was named MVP in Super Bowl XL as the Pittsburgh Steelers won 21-10. Ward scored a 43 yard touchdown in the 4th quarter, thrown by fellow wide receiver Antwaan Randle El. Overall, Ward had five receptions for 123 yards and one TD and one rush for 18 yards.

In the 2008 playoffs, Ward recorded 9 receptions for 168 yards, helping to eventually lift the Steelers over the Cardinals and win Super Bowl XLIII. In 2009, he reached 10,000 career receiving yards, making him the first in Steelers history. In the 2011 season, Ward became just the 19th player in NFL history to record 12,000 receiving yards, and he recorded his 1000th reception, making him the eight person in NFL history.  On March 20, 2012, Hines Ward announced his retirement from football.

He co-owns a bar in Pittsburgh's South Side called "South Side 86". In September 2010, President Obama appointed Ward as a member of the President's Advisory Commission on Asian Americans and Pacific Islanders.

Secure Hines Ward for Your Event

Based on your interest in Hines Ward as a speaker or for a personal appearance, Direct Sportslink has provided you additional links below for other sports talent with similar appearance fees, speaker topics, and categories that match Hines Ward.