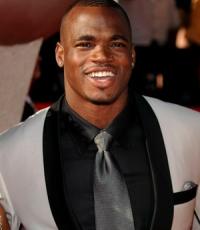 He was the 2012 NFL MVP and one of a select group of running backs to rush for over 2,000 yards in a single NFL season
Fee Range: Contact Us
Secure Adrian Peterson
for Your Event

Nicknamed "A. D." (for "All Day"), "A. P." and "Purple Jesus", Peterson was selected by the Minnesota Vikings with the seventh overall pick in the 2007 NFL Draft.

Peterson played college football for the University of Oklahoma, and set the NCAA freshman rushing record with 1,925 yards as a true freshman during the 2004 season. As a unanimous first-team All-American, he became the first freshman to finish as the runner-up in the Heisman Trophy balloting behind USC quarterback Matt Leinart. Peterson finished his college football career as the Sooners' third all-time leading rusher.

Following his stellar first pro season in which he set an NFL record for most rushing yards in a single game (296), Peterson was named the NFL Offensive Rookie of the Year. He was then awarded the MVP award for his performance in the Pro Bowl and became only the fifth player in NFL history to have more than 3,000 yards through his first two seasons. In 2010, he became the fifth fastest player to run for 5,000 yards, doing so in his 51st game.

Secure Adrian Peterson for Your Event

Based on your interest in Adrian Peterson as a speaker or for a personal appearance, Direct Sportslink has provided you additional links below for other sports talent with similar appearance fees, speaker topics, and categories that match Adrian Peterson.