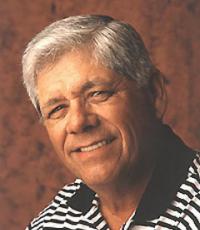 One of the world's leading golfers in the 70's and 80's; In his 50's he was a key star in making the existing PGA Champions Tour so popular
Fee Range: Contact Us
Secure Lee Trevino
for Your Event

For years, every day after work, he would work on improving his golf skills by hitting a least 300 balls a session. At seventeen, Trevino joined the United States Marine Corps and served four years. Over the last eighteen months in the service, a great deal of his time was spent playing golf with Marine Corps officers.

After his discharge, Trevino continued his pursuit of the game. In 1967, he began playing on the PGA Tour. In 1968 at the Oak Hill Country Club, he won the U.S. Open. Over the course of his career, Trevino won 29 times on the PGA Tour, including six majors. He was at his best in the early 1970s, when for a time he was Jack Nicklaus's biggest rival, winning the money list title in 1970, and picking up ten wins in two seasons in 1971 and 1972. He remained one of the world's leading players for more than another decade, winning his last major, the 1984 PGA Championship at the unusually advanced age of 44. When he retired in 1985, he was the third highest in earnings in the history of the PGA Tour.

Trevino also won more than 20 international and unofficial professional tournaments. In his fifties he was one of the key charismatic stars who helped to make the PGA Senior Tour, now the Champions Tour, a commercial success. He picked up the same tally of 29 wins on this tour as he had on the regular tour, including four senior majors. He topped the senior money list in 1990 and 1992.

Trevino played for the United States in the Ryder Cup six times, and had an impressive 17-7-6 win-loss-half record. In 1971 he was awarded the Hickok Belt as top professional athlete of the year and won Sports Illustrated magazine's "Sportsman of the Year" award.Through out his career, Trevino was seen as one of the more approachable and humorous of PGA golfers, and was frequently quoted by the press.

He was inducted into the World Golf Hall of Fame in 1981. From 1983-1989, Trevino worked as a color analayst for the PGA Tour. In 2000, he was ranked as the 14th greatest golfer of all time by Golf Digest magazine.

Secure Lee Trevino for Your Event

Based on your interest in Lee Trevino as a speaker or for a personal appearance, Direct Sportslink has provided you additional links below for other sports talent with similar appearance fees, speaker topics, and categories that match Lee Trevino.