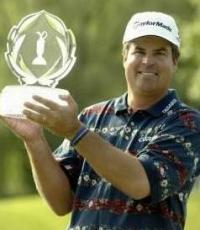 He was a member of several President's Cup teams; He is a member of the Kentucky Golf Hall of Fame
Fee Range: Contact Us
Secure Kenny Perry
for Your Event

After turning pro in 1982, he attained his first win in 1991 at the prestigious Memorial Tournament.

Perry's best season came in 2003, the year he turned 43, when he picked up three victories. He was in the top 10 of the Official World Golf Ranking. Perry picked up his eighth and ninth wins on tour in 2005 at the Bay Hill Invitational and the Bank of America Colonial.

He was the winner of the 2002 Charles Bartlett Award, given to a professional golfer for his unselfish contributions to the betterment of society, by the Golf Writers Association of America. Perry donates five percent of his winnings to Lipscomb University in Nashville, TN, to provide scholarships for Simpson County students. He won the 2009 Payne Stewart Award.

Secure Kenny Perry for Your Event

Based on your interest in Kenny Perry as a speaker or for a personal appearance, Direct Sportslink has provided you additional links below for other sports talent with similar appearance fees, speaker topics, and categories that match Kenny Perry.