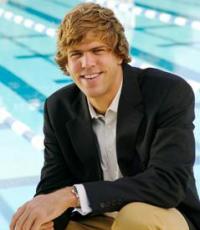 Hall is well known for his antics before a competition; frequently strutting onto the pool deck in boxing shorts and robe, shadow boxing and flexing for the audience.

Hall won two individual silvers and two team relay golds at the 1996 Olympic Games including helping set the world record in both the 400m freestyle and medley relays.

In 1999, Gary Hall Jr. was diagnosed with Type 1 diabetes, commonly referred to as childhood or juvenile diabetes. Upon his diagnosis, Hall struggled with the possibilities and the effects he knew the medical condition would have on his life. Hall took a short hiatus from swimming, but returned in time to compete in the 2000 U.S. Olympic Trials. There he won the 50m freestyle and placed second in the 100m freestyle. His 50m time, at 21.76 seconds set a new American record, beating the ten-year old record set by Tom Jager.

Hall's success continued in the 2000 Summer Olympics. He won the gold medal in the individual 50m freestyle, tying with his fellow American teammate Anthony Ervin, and won the gold and silver in the team relays. He also won the bronze in the 100m freestyle.

On 2004 Summer Olympics, he again won the gold medal in 50 m Freestyle, beating some important swimmers like Jason Lezak and Roland Mark Schoeman. He also won a bronze medal for competing in the preliminary heat of the men's 400 meter freestyle relay.

Based on your interest in Gary Hall Jr. as a speaker or for a personal appearance, Direct Sportslink has provided you additional links below for other sports talent with similar appearance fees, speaker topics, and categories that match Gary Hall Jr..