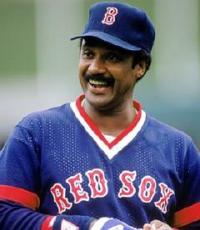 He remains the only player ever to lead MLB in triples, home runs, and RBIs in the same season; He is a member of the Baseball Hall of Fame
Fee Range: $5,000 - $10,000
Secure Jim Rice
for Your Event

A Jim Rice personal appearance, Jim Rice speaking engagement, or Jim Rice endorsement will reflect well on your company. To hire Jim Rice now for any corporate appearance, fundraiser, motivational speaker event, personal appearance, autograph signing, or website endorsement please contact our celebrity agents at 1-877-6-SPORTS. We will contact Jim Rice or contact Jim Rice's agent and provide you with the booking fees and availability immediately upon your request. Direct Sportslink is the only sports speakers bureau and talent booking agency based in the United States securing only sports talent for corporations, associations, and organizations for motivational speaking engagements, personal appearances, and endorsements. We are the premier sports celebrity booking agency and a sports celebrity procurement expert. Accordingly, we will provide you with any relevant Jim Rice website information and booking agent details so that you can hire Jim Rice for your next event.

Jim Rice played his entire career for the Boston Red Sox from 1974 to 1989. An 8-time American League (AL) All-Star, he was named the AL's Most Valuable Player in 1978 after becoming the first major league player in 19 years to hit for 400 total bases, and went on to become the ninth player to lead the major leagues in total bases in consecutive seasons, and join Ty Cobb as one of two players to lead the AL in total bases three years in a row. He batted .300 seven times, collected 100 runs batted in (RBI) eight times and 200 hits four times, and had eleven seasons with 20 home runs, also leading the league in home runs three times, RBIs and slugging average twice each.

In the late 1970s he was part of one of the sport's great outfields along with Fred Lynn and Dwight Evans, who was his teammate for his entire career; Rice continued the tradition of his predecessors Ted Williams and Carl Yastrzemski as a power-hitting left fielder who played his entire career for the Red Sox. He ended his career with a .502 slugging average, and then ranked tenth in AL history with 382 home runs; his career marks in homers, hits (2,452), RBI (1,451) and total bases (4,129) remain Red Sox records for a right-handed hitter, with Evans eventually surpassing his Boston records for career runs scored, at bats and extra base hits by a right-handed hitter.

When Rice retired, his 1,503 career games in left field ranked seventh in AL history. Rice was inducted into the Baseball Hall of Fame on July 26, 2009, as the 103rd member voted in by the BBWAA.

Secure Jim Rice for Your Event

Based on your interest in Jim Rice as a speaker or for a personal appearance, Direct Sportslink has provided you additional links below for other sports talent with similar appearance fees, speaker topics, and categories that match Jim Rice.