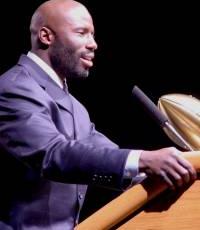 Davis was drafted by the Denver Broncos in the sixth round (196th pick overall) of the 1995 NFL Draft. Previously, Davis had played football for Lincoln Senior High School in San Diego, where Marcus Allen graduated from, Long Beach State and at the University of Georgia, where he played backup to Garrison Hearst.

Davis was instrumental in the Broncos victory over the Green Bay Packers in Super Bowl XXXII. His 157-yard, three-touchdown performance earned him MVP honors. He also was named the league MVP for the 1998 season. He is also probably one of the most popular players in Broncos history outside of legendary quarterback John Elway.

In 1998, Davis rushed for 2,008 yards, then the third highest rushing total in history. This performance earned him his third straight AFC rushing title, his first NFL rushing title, and his second time being named NFL Offensive Player of the Year by the Associated Press. In 1999, the Broncos beat the Atlanta Falcons in Super Bowl XXXIII, with Davis earning 102 rushing yards and 50 receiving yards.

Terrell Davis was nominated to the Pro Bowl in the 1996, '97, and '98 seasons. Nicknamed "TD," Davis popularized the "Mile High Salute," a military-style salute given to fans and teammates in celebration of a touchdown.

After the 1998 season, Davis was plagued with injuries and saw action infrequently. He retired during the 2002 preseason.

Secure Terrell Davis for Your Event

Based on your interest in Terrell Davis as a speaker or for a personal appearance, Direct Sportslink has provided you additional links below for other sports talent with similar appearance fees, speaker topics, and categories that match Terrell Davis.