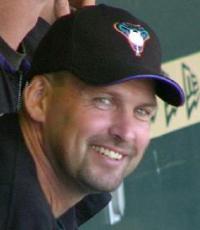 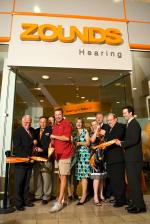 Zounds Hearing was looking for a well known Arizona sports celebrity to help increase awareness of their new store opening in Scottsdale, Arizona. Mark, a popular player and announcer with the Diamondbacks, was a "natural" as you can see from the photo.

After playing baseball for San Diego State University, Grace was drafted by the Chicago Cubs in 1985. He spent three years playing in the Cubs farm system before making his major league debut May 2, 1988.

Mark Grace was never a flashy power hitter, and was often overlooked on Cubs teams that included Sammy Sosa, Andre Dawson and Ryne Sandberg. However, Grace was a consistent, steady hitter, compiling almost 2,500 hits and more than 500 doubles during his 16-year career. He also had a career on-base percentage of .383 and collected four Gold Glove Awards. He holds the distinction of collecting the most base hits (1,754) and doubles (364) in the decade of the 1990s.

Upon leaving Chicago, the Arizona Diamondbacks proceeded to sign him, where he played for three more seasons, including helping the Diamondbacks to a World Series victory in 2001.

On September 26, 2003, Mark Grace announced his retirement from baseball and became a television color commentator for the Diamondbacks.

Secure Mark Grace for Your Event

Based on your interest in Mark Grace as a speaker or for a personal appearance, Direct Sportslink has provided you additional links below for other sports talent with similar appearance fees, speaker topics, and categories that match Mark Grace.