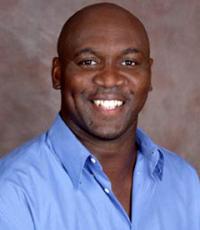 He is the first player in NFL history to lead the league in total yards from scrimmage in four consecutive seasons; He helped lead the Buffalo Bills to four Super Bowls
Fee Range: $10,000 - $20,000
Secure Thurman Thomas
for Your Event 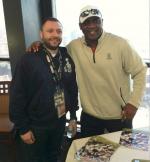 Direct Sportslink's client was hosting a Super Bowl VIP Party hours before the big game. They were looking for a Hall of Famer to "wow" the guests and Thurman was a great choice. He signed autographs and took pictures with every guest while sharing stories of his Super Bowl experiences.

Thomas attended college at Oklahoma State University. At Oklahoma State, Thomas had 897 rushes for 4,595 yards, 43 touchdowns, and 21 100-yard rushing games. He was also a Heisman Trophy candidate in his senior year.

A knee injury damaged Thomas's certain first round pick status and caused him to slip into second round (40th overall) of the 1988 NFL draft by the Buffalo Bills, their first choice in the draft. Thomas is well known as part of the offense that included Jim Kelly and Andre Reed, which led the Bills to four straight Super Bowl appearances.

Thomas retired the all-time Buffalo Bills rushing leader with 11,938 yards and the team record for yards from scrimmage with 16,532. He is also 4th overall in team scoring. Overall, Thomas finished his 13 seasons with 12,740 rushing yards, 472 receptions for 4,458 yards, and 88 touchdowns (65 rushing and 23 receiving).

Secure Thurman Thomas for Your Event

Based on your interest in Thurman Thomas as a speaker or for a personal appearance, Direct Sportslink has provided you additional links below for other sports talent with similar appearance fees, speaker topics, and categories that match Thurman Thomas.