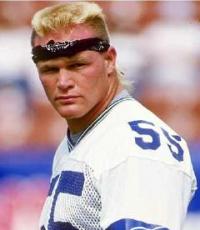 He was a college star at the University of Oklahoma where he remains the only college football player to ever win the Butkus Award twice
Fee Range: $10,000 - $20,000
Secure Brian Bosworth
for Your Event

Brian Bosworth ("The Boz") was a college star at the University of Oklahoma, known for being brash and arrogant, and is considered by many to be among the most colorful college football players in history.

Bosworth was drafted by the Seattle Seahawks in the 1987 supplemental draft, and signed the biggest contract in team history. A shoulder injury forced him to retire after only three seasons.

Bosworth is remembered as a great collegiate player, being named #30 in College Football News' list of the "100 Greatest Players of All-Time."

Bosworth starred in the 1991 action film Stone Cold and has had an on-again, off-again film career since. In 2005, he had a role as one of the prison-guard football players in the Adam Sandler movie remake The Longest Yard.

Secure Brian Bosworth for Your Event

Based on your interest in Brian Bosworth as a speaker or for a personal appearance, Direct Sportslink has provided you additional links below for other sports talent with similar appearance fees, speaker topics, and categories that match Brian Bosworth.