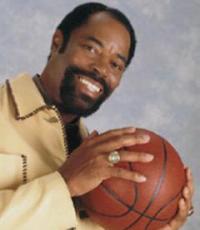 Frazier, a 6-foot-4, 205-pound guard was the first-round draft choice of the New York Knicks. Although best known as an outstanding defensive player, Frazier averaged 21.7 points a game in 1970/71 to become the first guard ever to lead the team in scoring.

The Knicks won two NBA championships, in 1970 and 1973, during Frazier's ten seasons with the team. He tied an NBA playoff record with 19 assists in the 1970 championship game against the Los Angeles Lakers.

A snappy dresser, he was nicknamed "Clyde" by teammate Nate Bowman early in his career because he was wearing a derby hat that reminded Bowman of Warren Beatty as Clyde Barrow in the movie Bonnie and Clyde. The nickname was often lengthened to "Clyde the Glide" because of his smooth style of play.

Frazier was traded to the Cleveland Cavaliers in 1977 and he spent two seasons there before retiring. He was a first-team All-Star four times and was named to the NBA's all-defensive first team seven years in a row, from 1969 through 1975.

Secure Walt Frazier for Your Event

Based on your interest in Walt Frazier as a speaker or for a personal appearance, Direct Sportslink has provided you additional links below for other sports talent with similar appearance fees, speaker topics, and categories that match Walt Frazier.