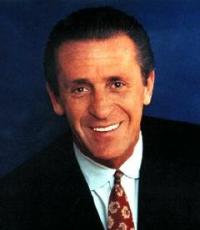 A Pat Riley personal appearance, Pat Riley speaking engagement, or Pat Riley endorsement will reflect well on your company. To hire Pat Riley now for any corporate appearance, fundraiser, motivational speaker event, personal appearance, autograph signing, or website endorsement please contact our celebrity agents at 1-877-6-SPORTS. We will contact Pat Riley or contact Pat Riley's agent and provide you with the booking fees and availability immediately upon your request. Direct Sportslink is the only sports speakers bureau and talent booking agency based in the United States securing only sports talent for corporations, associations, and organizations for motivational speaking engagements, personal appearances, and endorsements. We are the premier sports celebrity booking agency and a sports celebrity procurement expert. Accordingly, we will provide you with any relevant Pat Riley website information and booking agent details so that you can hire Pat Riley for your next event.

Pat Riley is not only one of pro basketball's winningest coaches, but his speeches before hundreds of corporations have earned him the title of "America's Greatest Motivational Speaker." He has been rated by Success Magazine as "The best in his field." Pat is a consummate competitor who knows the exhilaration that comes with winning. His philosophy is based upon winning, leadership, mastery, change, and personal growth as well as understanding and controlling the shifting dynamics of a team -- any team, whether it is a small company, a giant corporation, a city, or a group of athletes. Pat has also completed an award winning 30-minute motivational video entitled "Teamwork" in which he applies his winning philosophies to business and life in general. His books Show Time and The Winner Within have appeared on the New York Times Best Seller list.

Riley won the 2012 NBA Championship with the Miami Heat as their team president. This made him the first NBA figure to win an NBA championship as a player, coach (both assistant and head), and executive. He received the Chuck Daly Lifetime Achievement Award from the NBA Coaches Association on June 20, 2012.

Secure Pat Riley for Your Event

Based on your interest in Pat Riley as a speaker or for a personal appearance, Direct Sportslink has provided you additional links below for other sports talent with similar appearance fees, speaker topics, and categories that match Pat Riley.