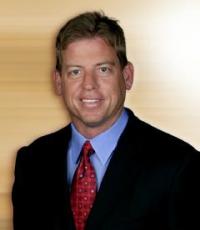 The youngest of three children, Aikman played college football at both the University of Oklahoma and UCLA. He went on to lead the Bruins to a 20-4 record over two seasons, and wins in the 1987 Aloha Bowl and the 1989 Cotton Bowl. He finished his college career as the third highest rated passer in the history of NCAA Football.

The #1 Pick in the 1989 NFL Draft, Aikman proved resilient, and, in 1990, led the Dallas Cowboys to the brink of the playoffs. In 1991, the Cowboys made it to the playoffs and Aikman was selected to the first of six consecutive Pro Bowls. In 1992, Aikman set career highs in completions (302), passing yards (3,445), and touchdown passes (23), and led the Cowboys to Super Bowl XXVII at the Rose Bowl in Pasadena against the Buffalo Bills. He was named Super Bowl MVP. The 95 season saw a return of Dallas when the Cowboys won a record-tying 5th Super Bowl beating the Pittsburgh Steelers. In 1997, Aikman became the first quarterback in Dallas history to have three straight 3,000-yard seasons.

He ended his career as the Cowboys' all-time leading passer (32,942 yards). He threw for 165 touchdowns in 12 seasons with the Dallas Cowboys and threw for 3,849 yards and 23 TDs in the postseason.

After his retirement as a player, Aikman joined Fox's NFC telecasts as a color commentator for the 2001 season. Aikman received an Emmy Award nomination for his television work in 2004, and worked Fox's broadcast of Super Bowl XXXIX in January of 2005. He was intuctied into the Pro Football Hall of Fame in 2006.

Troy Aikman is a born leader, a winner, and a champion who has had success both on and off the football field. As a speaker, Troy conveys the confidence and commands the respect that is crucial when hiring the perfect guest keynote speaker for your event.

You can see Troy often during the NFL season where he makes various appearances as a broadcaster on FOX. He also makes personal appearances on behalf of his foundation.

One of the true "good guys", a Troy Aikman endorsement would bring instant credibility to any product. He is well spoken, good looking, and been on winning teams in both college and the NFL. As a quarterback he turned around "America's Team", the Dallas Cowboys to win several Super Bowls. He can do the same for your product with his endorsement.

Secure Troy Aikman for Your Event

Based on your interest in Troy Aikman as a speaker or for a personal appearance, Direct Sportslink has provided you additional links below for other sports talent with similar appearance fees, speaker topics, and categories that match Troy Aikman.