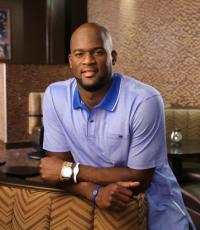 As a junior in college, Young finished second behind Reggie Bush in the voting for the Heisman Trophy, but did win the prestigous Davey O'Brien Award which is given annually to the best collegiate quarterback in the nation. Following the Heisman voting, Young led his team to a BCS National Championship against the defending BCS national champion, University of Southern California, in the 2006 Rose Bowl. The game was called one of the most-anticipated games in the history of college football.

In the Rose Bowl, Vince Young put on one of the most dominating individual performances in college football history, accounting for 467 yards of total offense (200 rushing, 267 passing) and three rushing touchdowns (including a 9 yard TD scramble with 19 seconds left) to lead the Longhorns to a thrilling 41-38 victory. This performance led to him winning Rose Bowl MVP honors for the second consecutive season. After the game, former USC and NFL safety Ronnie Lott said "Vince Young is the greatest quarterback to ever play college football." Trojans coach Pete Carroll said "that was the best [performance] I've seen by one guy." Young finished the season with 3,036 yards passing and 1,050 yards rushing earning him the Davey O'Brien Award

In 2006, ESPN named Young as the 10th best college football player of all time.

As a Tennessee Titan, set the NFL record for rushing yards by a rookie quarterback. He won the Associated Press NFL Offensive Rookie of The Year honors at the conclusion of the 2006 NFL campaign, becoming only the third quarterback to win the award, along with Dennis Shaw and Ben Roethlisberger. Young was named to the 2007 Pro Bowl for the AFC.

As a result of his strong on-field performance and his ties to the Houston area, January 10, 2006 was proclaimed "Vince Young Day" in his hometown of Houston, Texas. The University of Texas retired Young's jersey on August 30, 2008. After the Titans, he played for the Philadelphia Eagles briefly.

Secure Vince Young for Your Event

Based on your interest in Vince Young as a speaker or for a personal appearance, Direct Sportslink has provided you additional links below for other sports talent with similar appearance fees, speaker topics, and categories that match Vince Young.